You did read right!
A package of pork stew meat was sitting in the fridge awaiting to be made into something eatable.
And, recently I found a recipe that was called: Pork sirloin with chocolate orange sauce.

Is it possible to combine pork and chocolate? Really?
There was only one way to find out, I had to go and try!

J.P. 's remark after he started eating: " What is that? The sauce tastes something like ...mmh, I don't know but it is good."
Upon telling him that it was a orange/chcolate sauce he looked at me saying: "You are kidding me, right?"
Wrong.
As it happened so often - some of the ingredients i didn't have.
Here is what I made out of the original.
To balance the acidity of the orange juice I chose to add some sugar. And, I can imagine that, if I had had one, a drop of cream would have been good to add too.
Since I didn't have any baking chocolate in my pantry either, I had to improvise and make some. (see: directions)
Nonetheless, the whole turned out to be a very tasty stew, in a rich brown sauce. Definitely a good combination that I will use again.

As an additional information:
The day after I mixed the leftovers of two stews I made on March 5 and March 6.
Hubby and I agreed that the combination was even better.
The reason:  the chocolate flavour was there, but more subtle.


Ingredients: (My own alterations are shown in brackets).

Directions: (for the original recipe go here)
(Heat the oil and brown the meat for a few minutes. Add  seasoning and orange juice. Simmer for about one  hour. Add on water as needed, but keep it to a minimum, just so that the meat doesn't cook dry. 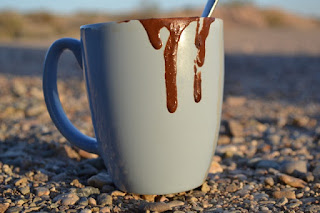 Chocolate is a combination of cocoa and cocoa butter so, I  mixed cocoa powder with little bit of water until dissolved, added 1 tbsp oil, (preferable coconut oil) and mixed the fluid cocoa to the meat about 5 minutes before serving.

Side dish: Pilaff rice and stir-fried, mixed vegetables.
Posted by Bea at 23:01