Cabbage and Noodles? Why not?

Some time ago I was made aware by Betty that there was a dish that is made out of cabbage and noodles. I had never heard about something like it. Cabbage - yes. Noodles - yes. But together?

As usual I went online and - TADA! - there are tons of recipes describing Cabbage and Noodles in a combination. Amazing!

As I understand it originates as a Hungarian or Polish dish.
Makes sense to me. That was what people had available on their small farms. Cabbage from their fields/gardens; hens gave the eggs and milk from a cow, and ham from a hog. There was no way of going to the next supermarket. You had to do all from scratch.
Even the noodles. (egg, milk, flour, salt and nutmeg)
And here comes the difference. I didn't have any real home made egg-noodles (Spaetzle) and I didn't want to try making some. (It might be idea for another posting.)
Plain noodles had to do the trick.
I found a recipe I liked and added some ham and a milk and egg mixture before setting the casserole in the oven. The dish can good be an "all vegetarian" if one doesn't add the bacon and ham.
Easy to make, tasty, and nice on the budget. 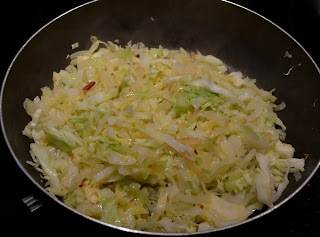 Mix together noodles, cabbage and crumbled bacon. Bake, covered for 30 minutes in 300 degree oven. The last 5 minutes uncover and spread or spoon on the sour cream and sprinkle with paprika.