Haven't you experienced the same? STUFF grows, constantly.
When we married we throw together two households and had nearly everything in double. We moved - and downsized. First time was the hardest. Many things were connected to dear memories.
We got through with it.
When we came to Canada we had to downsize again and arrived with only a very small amount of stuff.
After several years we decided to move from West to East and we had to downsize again.  The house we moved into seemed so big and empty.
But coming from a trailer-life back into our dwelling it appears that the house has gather stuff AGAIN. It is everywhere.
I wish I could throw everything out what is not necessary instead of hoarding it.

Back to the kitchen counter. I admit the it is nice to be back in a real kitchen for a change.
Though - I think my U-formed one in the travel trailer is more convenient. Kind of shorter way of getting to things and more countertop to work on. ;)

Today I prepared "Geschnetzeltes". Wonder if someone can pronounce that. (Laugh) 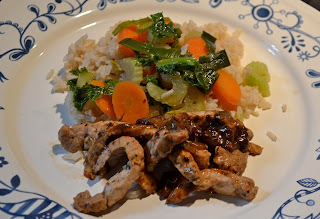 I means "finely sliced" meat. My dear husband bought a boneless pork roast and I got the idea to do it the German way.

Directions:
Finely sliced meat  and dust it lightly with flour. 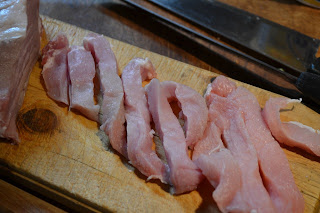 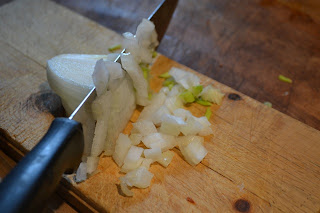 Mince onions and brown both in little margarine until brown. 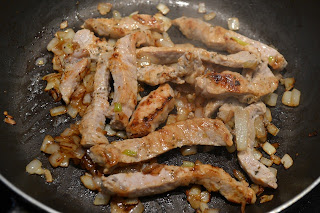 Best is to do it in two batches. Set aside.
Brown mushrooms in butter, add the meat/onions and fill up with white wine. Simmer until meat is done. Season and add the cream.

This was the original recipe. I didn't have mushrooms, whipping cream or wine. So, I browned the onions and the meat. The meat was so tender that it didn't need more cooking time.
I sat the meat aside and filled the pan with some broth, sour cream and a little vinegar. Reduced the sauce until it was thickened and added the meat to warm it up again.
Served with sautéed carrot, leek, celery and cooked rice. 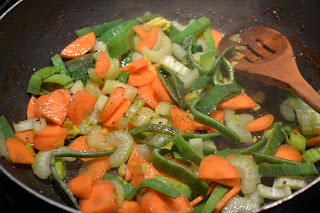