We nearly made it across Arkansas. Parking in Wally-Mart in Arkansas was not an option, at least not along the I-40. All the Marts we checked out didn't want big rigs to stay overnight. Some of the real rest areas even said: 2 hours parking only! Others were too cramped or very uneven. Nothing compared to the wide open spaces we know from the West.

There are two spots which are recommendable. A rest area near mm 33, Ozark and near mm 235, Palestine, areas we already checked out last year. Nice spots with lots of oak trees and (for Molly) squirrels.
"Overnight camping only" the sign said. That's fine with us.

Today we had beef stew on rice. The original idea was to have the beef ribs grilled, but the "chef de grille" did go on strike: it rained =  no grill.
Luckily I did the stew last night, it only needed to be heated up again for today's dinner.

Tomorrow we have a marathon day ahead. No overnight stays allowed on Tennessee's rest areas and truck stops usually are too noisy.


Long days on the highway. The sunny skies, the heat and the beautiful desert landscape of the West stayed far behind. 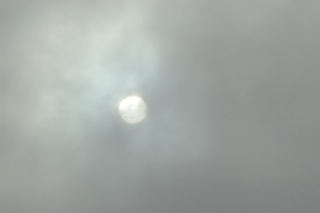 Here the sun had a hard time to penetrate the wintery grey clouds. 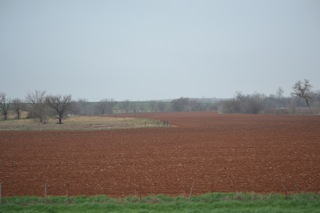 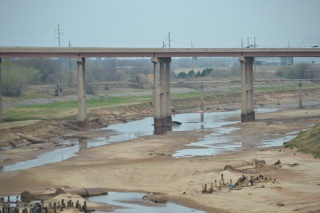 Agriculture dominates the view. Oklahoma's soil is particularly red and many rivers we crossed show signs of the drought. 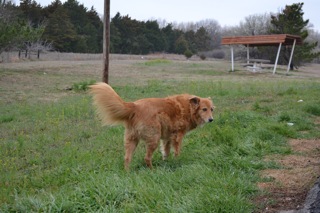 After a long morning ride we stopped to give Molly a break and us a "refill". 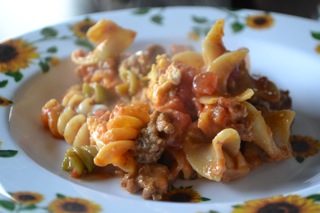 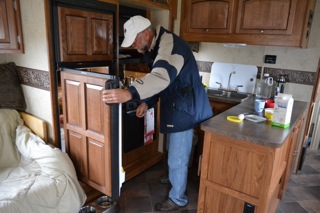 My dear husband volunteered to "fix" something easy for lunch before we went on, and on, and on.

Tomorrow we will enter Arkansas. Hopefully we can stay as long as possible south of the frigid air. 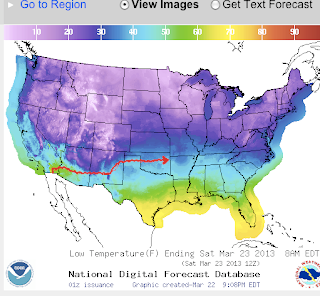 Sniffing out the culprit.

This input is not about food. And because of a very slow internet connection I can use one small photo only.

Sunday, when I talked about having a good nights sleep I was wish thinking. There was no such thing.
Upon entering the bedroom I was assaulted by a sweetish, chemical smell that had not been there before. What could it be? A burned wire in the wall?
My dear husband only scoffed about my complains, he couldn't smell anything.
His suggestion:  it was still some pollution hanging in the air from that burned out motorhome we parked close to for a while before we came to this campsite.
I aired the room properly and it was somewhat better, but not for long.
He went to bed.
I got out in the dark  and opened the small compartment close to my bedside.

Yes, the odour was stronger here, but in the dark, even with a flash light I couldn't make out what it was.
Grumbling, hubby went out as well to have a "look-see", but he couldn't smell anything there either. It had to be all in "my imagination" and HE went to sleep.

Sorry, but I COULD NOT SLEEP with that sweet, cloying, chemical smell wafting around my nose. Could be toxic, couldn't it?
After an hour tossing and turning, I got up and tried to sleep on the couch. That was already occupied by Molly. So, even she didn't want to sleep in the bedroom tonight. NO GOOD!

Early this morning, after breakfast, while hubby walked the dog, I went out again and checked compartments once more, determined to find the reason.
The bigger one under hubby's bed had no smell to it.
The smaller one though, closest to my bed, had.
Out came the water hoses and other stuff he had stored there and -
AAAHH!
I found the culprit!
A container with fuel stabilizer that leaked in the heat. Some of the content had soaked a cloth and part of the bedroom carpet that stuck out under the thin wall adjoining the bedroom.
After cleaning up the mess I checked the carpet in the bedroom and sure - the stench was there.
I stuck the bottle and cloth up under my dear husband's nose. NOW he could smell it too! UGH! 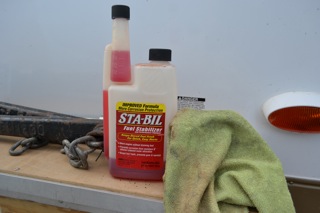 In lieu of a carpet cleaner we used shaving foam on the soiled carpet. (Had just read about this trick on a web page some days ago).

Tonight I will finally be able to sleep again, though surrounded by the smell of shaving foam. :))

After this problem was solved we went of on our adventurous trip to Roosevelt Lake and the Apache Trail.

From the flats of California to the mountains east of Phoenix, AZ, we
changed the heat for fresh cool mountain air. 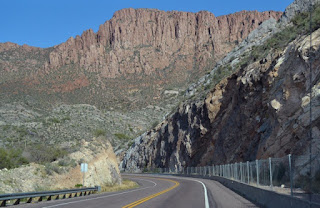 Though we didn't make it all the way to Globe, AZ as planned.
The day started OK but then the trip got a little "nerve racking", but we are safe and sound. Going up the mountain our van overheated and we had to stop and cool the engine at a very scary turnout. (read his input for March 17th)

A heated discussion followed. I wanted to turn around asap, but hubby wanted to press on to Roosevelt Lake. "MEN!":((
Luckily we found a campground close by where we stopped and hooked off our
camper trailer and the van got a break to cool off.

A fellow camper told us that this mountain road causes a lot of trouble for many travellers because of the long and steep incline.
So, tomorrow we will be off to Roosevelt Lake and the Apache Trail for a day trip.
Off course without the camper trailer.


I tell ya, it happens not often, but today I needed a beer! 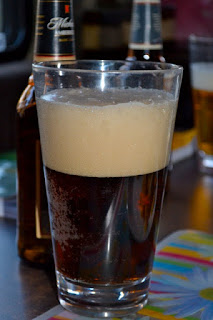 After a quick dinner of shepherds pie and a mixed veggie salad I am ready
for a long good sleep. 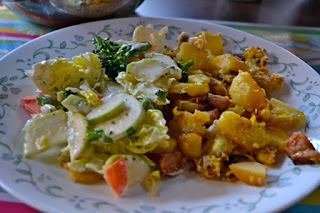 That should not be a problem, it is quite cooler up here than in the desert.

The "Day" has finally arrived. In a few hours we will be on our way north again. And right so too, it is getting way too hot for my taste.
Three days with well above the 90's F (over 35 C).
I am ready for cooler temperatures and greener pastures!
Yesterday was the big day of packing down and stowing away.
One of the leaving neighbours brought vegetables over, right from the fields, for free. Before hubby could pack down the cook stove I boiled the most of it and packed it into freezer bags. This way I don't have ready vegetables for the next few days.

A few visits and "good-byes" have still to be said. Hopefully we all meet again in a few month, for another nice winter in the south-western desert of California.