Sometimes I despair about "blogger". Sigh.
Mark, I have no Windows "life-writer", I am Mac owner.

-The distances between text and photos are totally different             in the blog than on the preview.

-There is no reply button in the comment section.

-And why does a posting appear on the wrong spot?
This one here should have been visible on Wednesday AFTER the "Easter Sunday" posting and not before.

About the "magic squares" and other gardening stuff.

The author suggests that instead of having a labour intensive, conventional garden, to try and play with a 9x9 ft square. Big gardens seem too intimidating, and who needs long rows of carrots, cabbage, lettuce and tomatoes when you have only two people to feed?
If you liked it, you could always add another square and so on.
So, the magic square it was.

Hubby was so kind to produce the wooden frames; I had decided for two.
The idea is to divide each square in several, smaller squares,
then plant a few different plants in each section.
That way you get a lot of variation and it isn't overwhelming.

These two squares gave me 2 x 9 smaller squares to fill.
I planted:
3 broccoli, 3 cauliflower, carrots, beans, sweet corn, 4 tomato plants, lettuce, parsley, chives and some flower seeds (cosmos, sun flowers).
Weeding was not a problem at all, and it was amazing how much we got out
of such a small area. It provided plenty of fresh vegetables all summer long!

This was so encouraging that I decided last year to add two more squares.
But I had to dig up soil the old fashioned way, there was just not enough time for hubby to get two more squares ready in time. 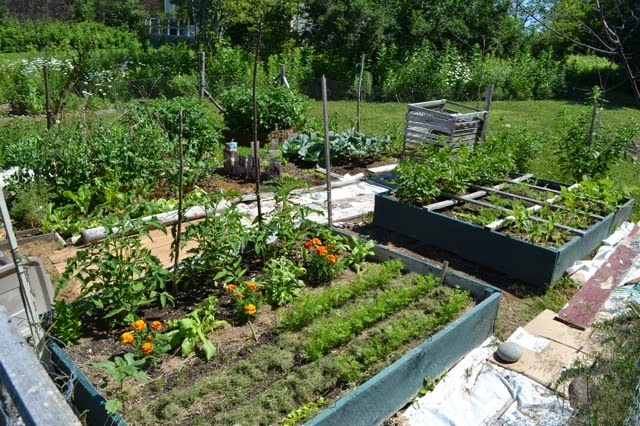 Second attempt with added area for more vegetables
(early July 2013)
I drew a sketch of the garden to remember what I planted where.
Now I am able to just move the combination of crops over to a different square with each new season.
That way I don't use the same vegetable in the same spot more than once in the time of a four years rotation.
It is good for the soil and prevents diseases.

My dear husband finally had time to construct the additional two squares I had requested and I am glad for that.
Weeding and watering is so much easier in raised beds. 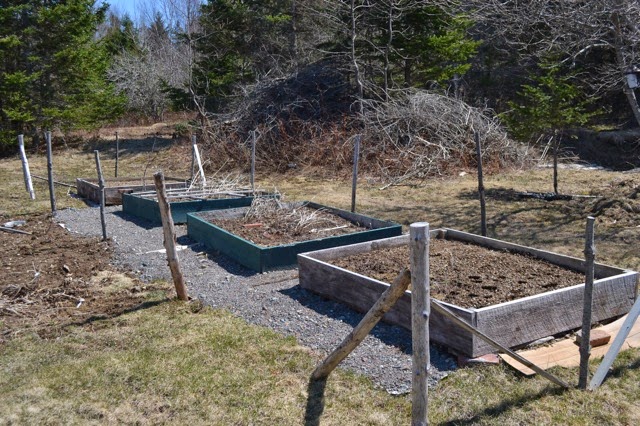 (April 2014)
Now I am eagerly waiting for the weather to turn warmer in order to get a new round of crops into the ground. But it doesn't look good at all! :((

On my list are:
3 Broccoli, 2 white cabbage, red beet, radish, 6 peas, carrots, 6 bush beans, 9 sweet corn, 1 tomato, basil, parsley, cilantro, lettuce, collard green, and of course potatoes.
That sounds maybe much, but remember, there are just a few plants of each. Enough to provide a wide variety of organic greens all summer long.
˜˜˜
Otherwise there is not much of a "flower garden".
Most of the houses here are surrounded by coarse grass. That's the easiest way to keep a tidy look all year round. 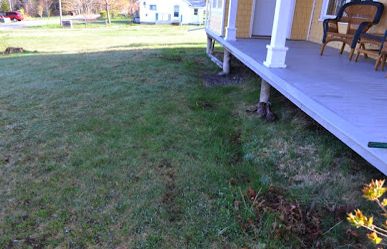 Nondescript, boring front in 2010
In my dreams I would like to have "botanical garden", but that unrealistic. Therefor I dug up just a very few, small flower beds. One front of the house, one around the apple tree,  an other around a big rock, and a "proving ground" where new plants are placed to see if they can survive.

Add to that a vegetable plot and you get the idea. 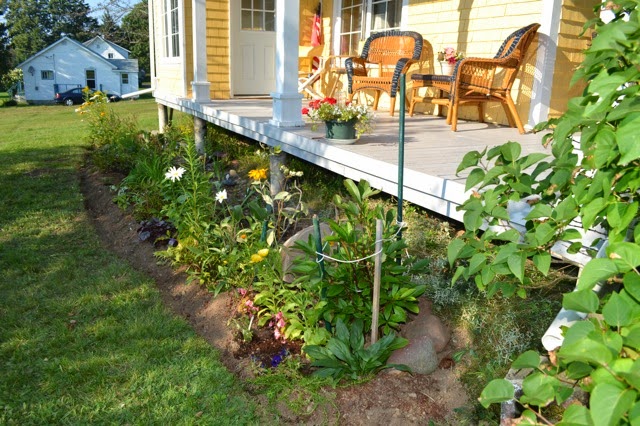 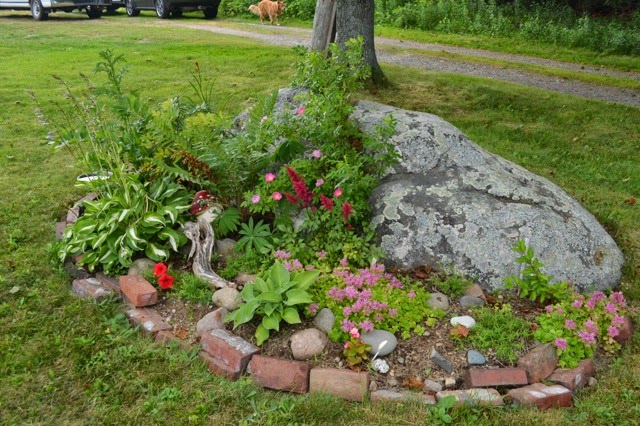 July/August 2013
So much more pleasing to look at.

˜˜˜
Apropos to:
Barbara: It was really easy. Just set your camera on auto and "multiple shots", keep the focus on one bird and start shooting as soon as it makes a move. I took 46 shots all in all. It could have been worse. Laugh.

I must have hit the wrong button because this posting
did not get published on Sunday.
Here it is now.

What did we do on a beautiful Easter Sunday? 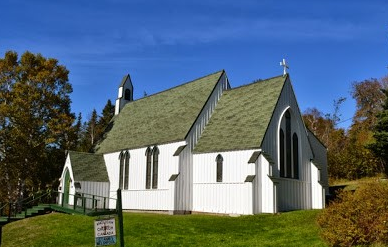 The day started with Easter Mass and
an Easter Brunch at our little Anglican Church.
And finally the temperatures crept over the 50 F mark (10°C),
and in the afternoon it was quite nice to be outside. 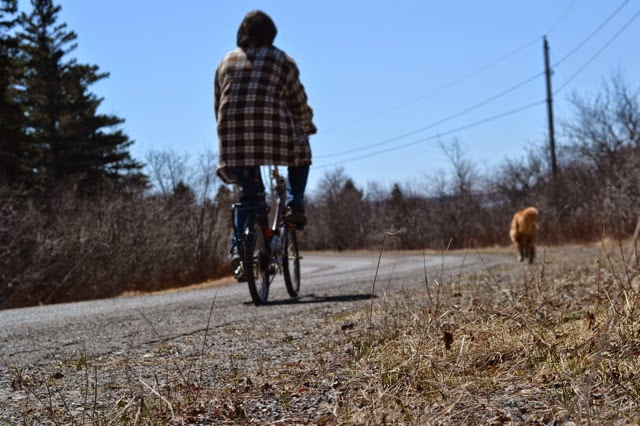 I decided to take my folding bike and go
for a leisurely ride around in the neighbourhood.
(I was too lazy to take around the tripod,
just left the camera on the ground.) Along the road I captured more signs that spring is on it's way. 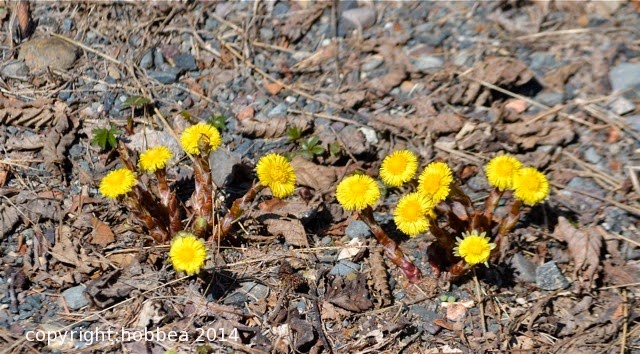 Coltsfoot, (Tussilago farfara)
The first bright colours in all the winter-brown surroundings.

Back at home I took a look around at my garden while my feathery friends were watching my movements. 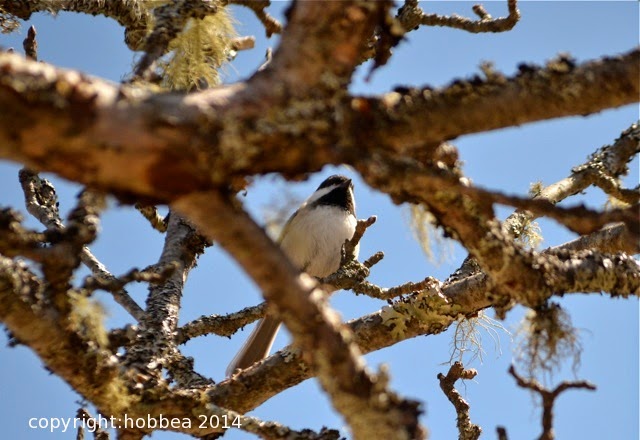 Chickadee in the apple tree 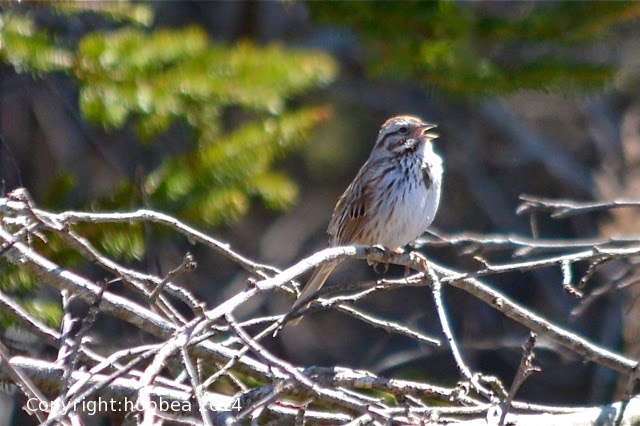 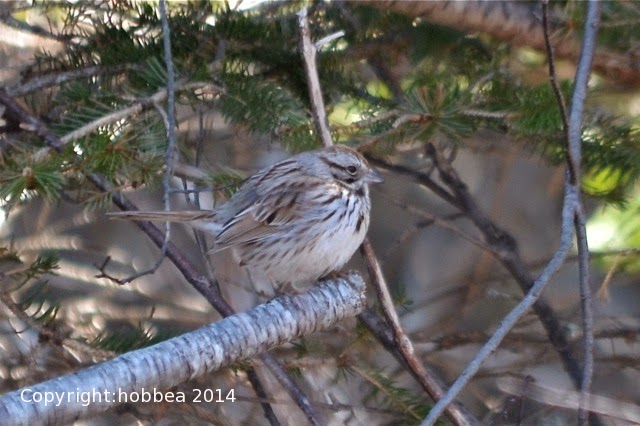 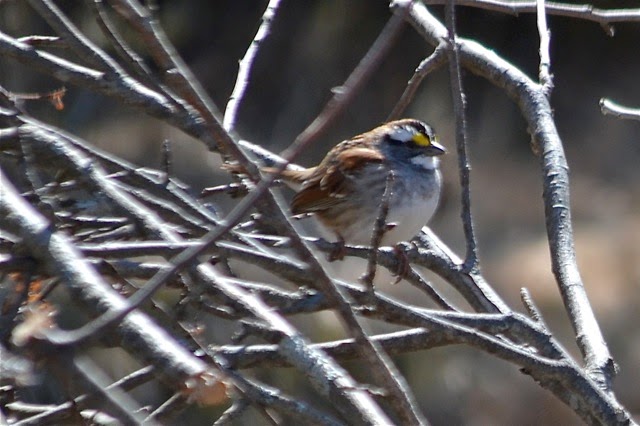 White Throated Sparrow
Finally, I couldn't resist any longer, grabbed the gardening tools and started cleaning up my flower beds. 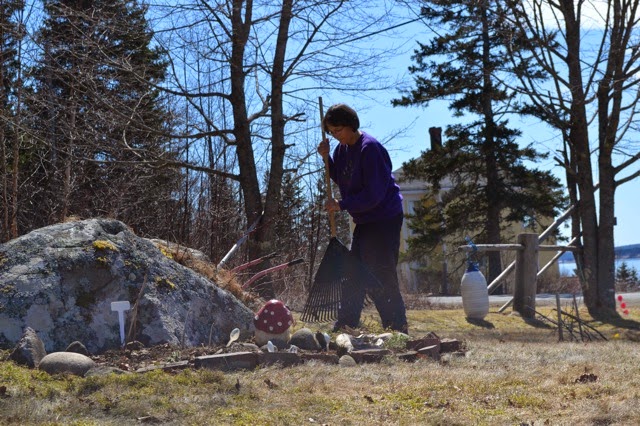 With that I declare:
My gardening season for officially started! :))
It is still a long way from having fresh vegetables.
Posted by Bea at 20:17 4 Comments

There is not much happening here at the moment.
Too cold to do gardening, too rainy and windy to go outside.
Gazing out the window I observed several
American Robins searching around for their breakfast (earthworms).
They seemed all very concentrated on the job.

I grabbed the camera and this is the result.
I think I prefer my oatmeal!
~~~

Apropos to:
George: Thanks, for the hint. I found it in "settings" and will see how it works. - I haven't seen any woodpecker yet in my yard.
Wanderin' and Connie/Barry
Gardening is one of my favourite for the summer season, especial after a long stay in the dry desert.:))
Posted by Bea at 20:15 2 Comments